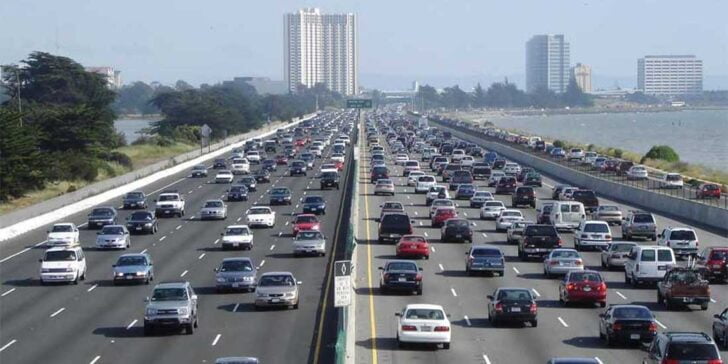 Pavement Markings and What Colors Mean

Pavement markings are typically white or yellow. Other colors exist, but white and yellow are the most common colors and the ones you must know the meaning of for your written DMV test and permit practice. 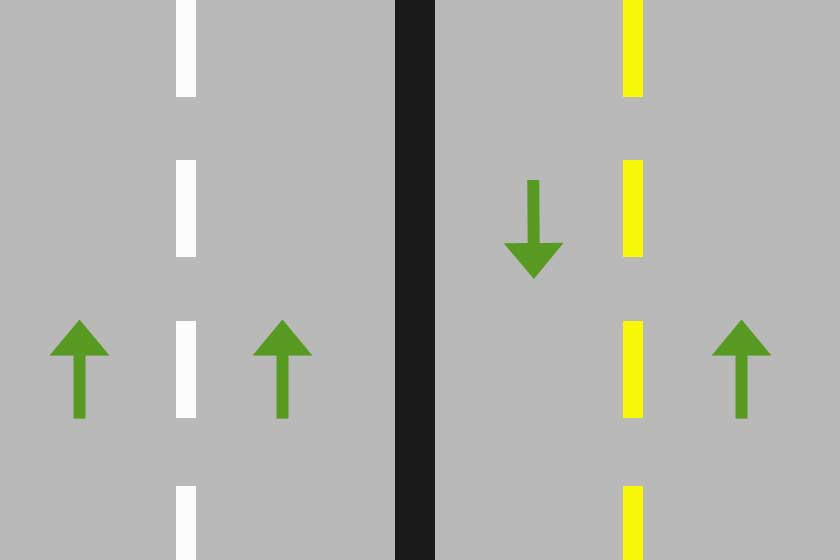 On a road with yellow lines in the center of the road, traffic travels in opposite directions. You are on a two-way roadway and must drive to the right of these lines.

If there is a single solid yellow line painted on the left edge, you are traveling on a divided highway or a one-way street. The yellow line often marks the edge of the median or divider. There is usually one on each side of the divider.

The right edge of the roadway is marked with a normal solid white line (edge line).

Remember: if there is a yellow line is on your right and a white line on your left, you are going the wrong way.

A yellow (center) line must always be on your left! 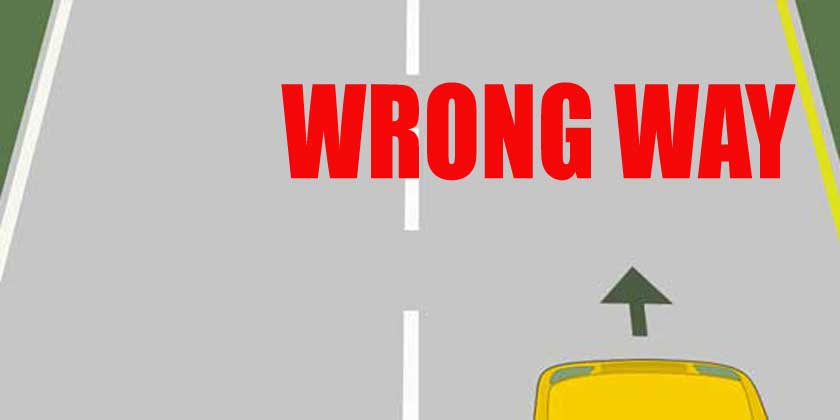 On a two-way roadway, the yellow center markings can consist of:

A normal broken yellow line marks a two-direction passing zone. Traffic traveling in either direction may pass other vehicles with care and when the way ahead is clear. 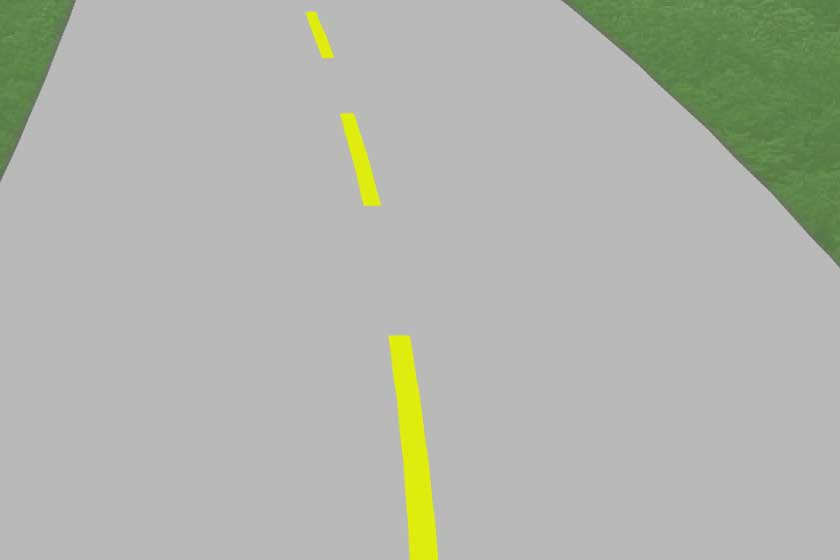 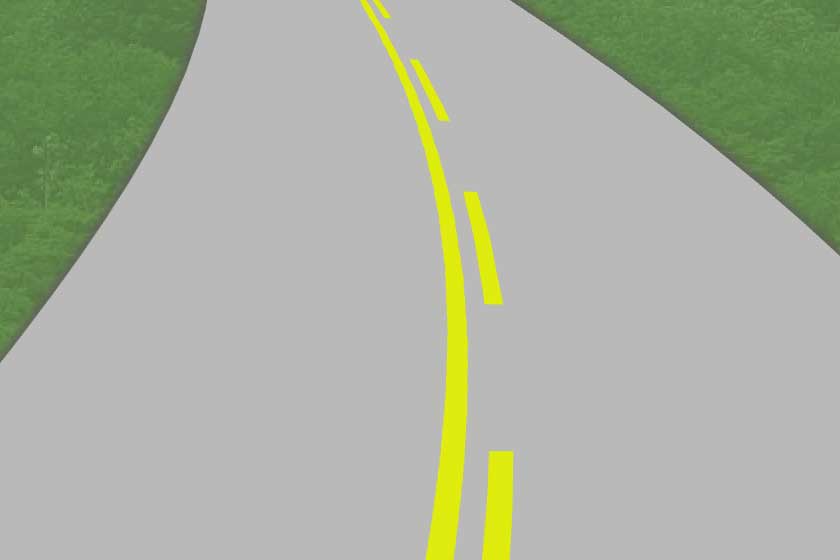 Two normal solid yellow lines mean that traffic from either direction is prohibited from passing. 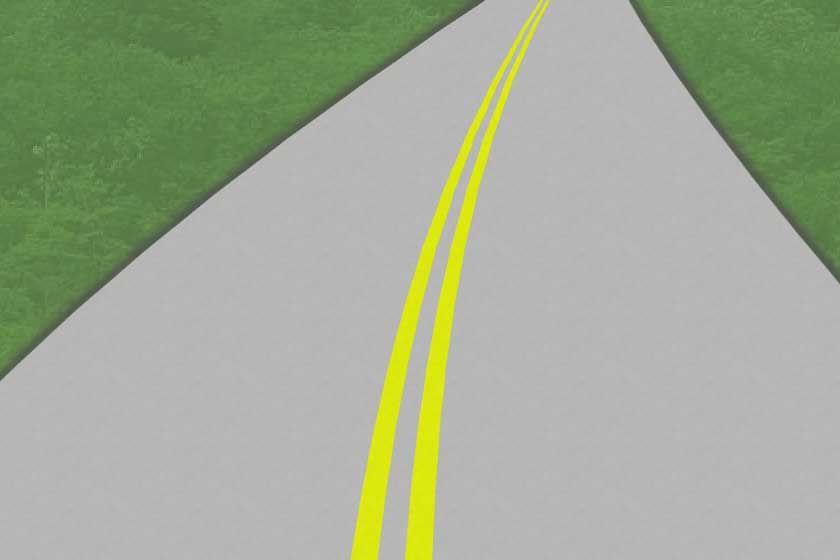 If you travel on an undivided two-way roadway with four or more lanes, the center of the road is marked with a solid double yellow line. Don’t drive to the left of the center, unless you must cross the lines to turn left. 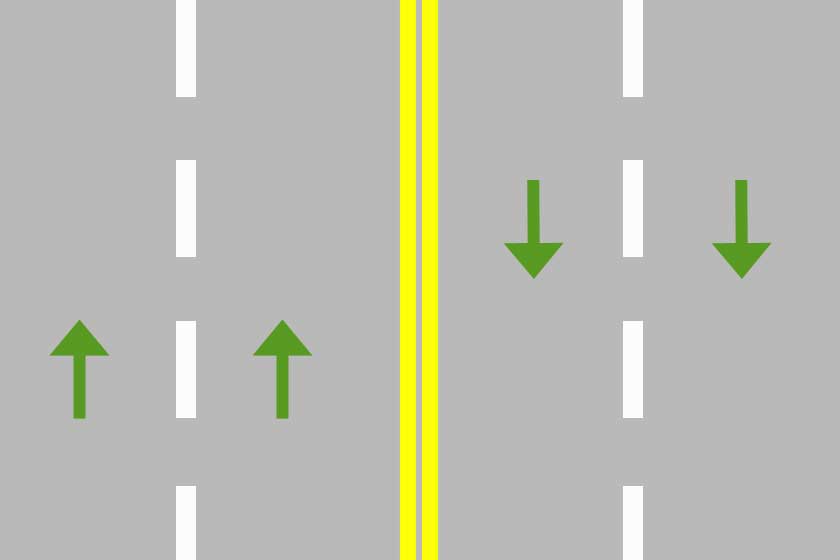 Solid yellow lines mark no-passing zones. You may not cross these lines to pass other vehicles.

Some states make an exception for slow-moving bicycles or other obstructions in your travel lane. In Florida, as an example, you may cross the lines when an obstruction exists making it necessary to drive to the left of the center of the highway. When a bicyclist is traveling so slowly as to constitute an obstruction, a motorist may cross the center line in a no-passing zone if the way is clear and it is safe to do so. 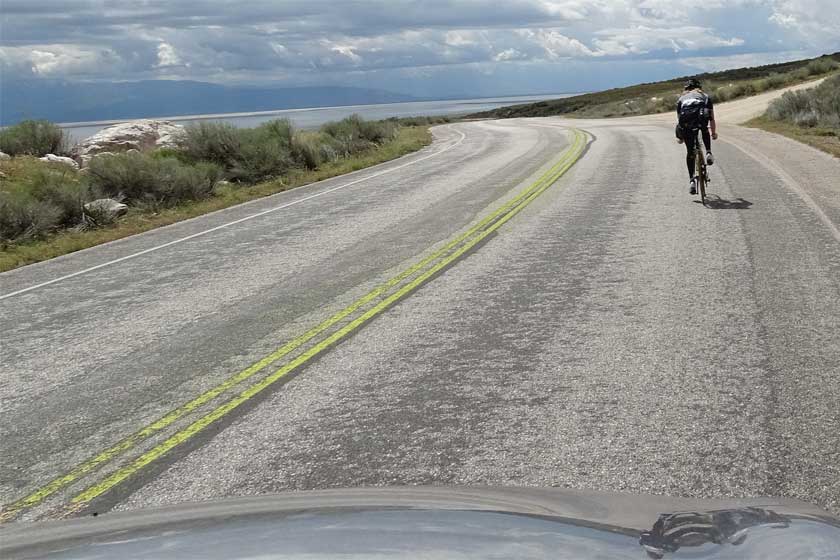 Remember, the solid yellow line is there for a reason. In many situations, it may be dangerous to pass. Don’t try to pass the bicyclist by giving less clearance or squeeze the bicyclist off the road. If state laws prohibit passing or if you don’t have a clear view of the road ahead, stay behind the bicyclist until it is safe to pass.

You can cross yellow lines in a no-passing zone to turn left turn into a driveway or side road.

Unless state law specifies otherwise, you may also be allowed to make a U-turn across a single or a a double yellow line. You should make sure you know and understand the law in your state. 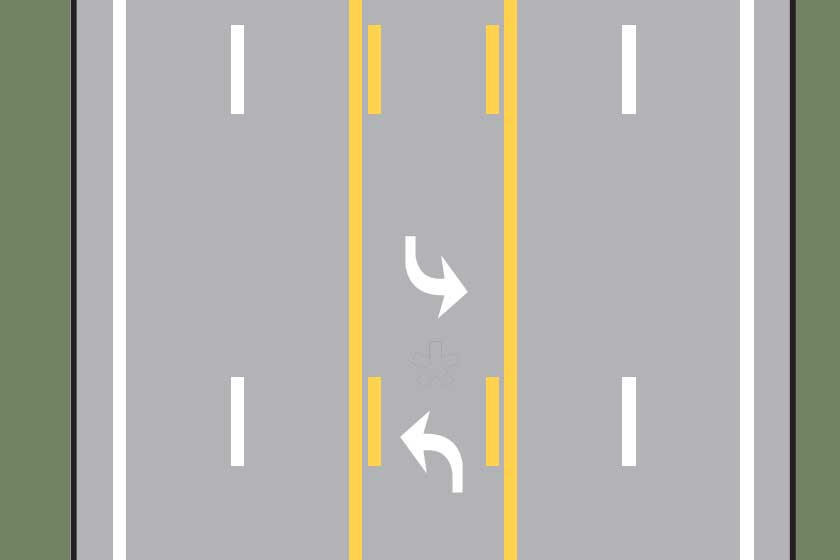 You cannot use this lane as a normal travel lane or use it to pass other vehicles. You should only enter this lane when preparing for a left turn.

Users often misunderstand the arrows painted on the pavement, thinking that the lane is for both left and right turns. It isn’t. 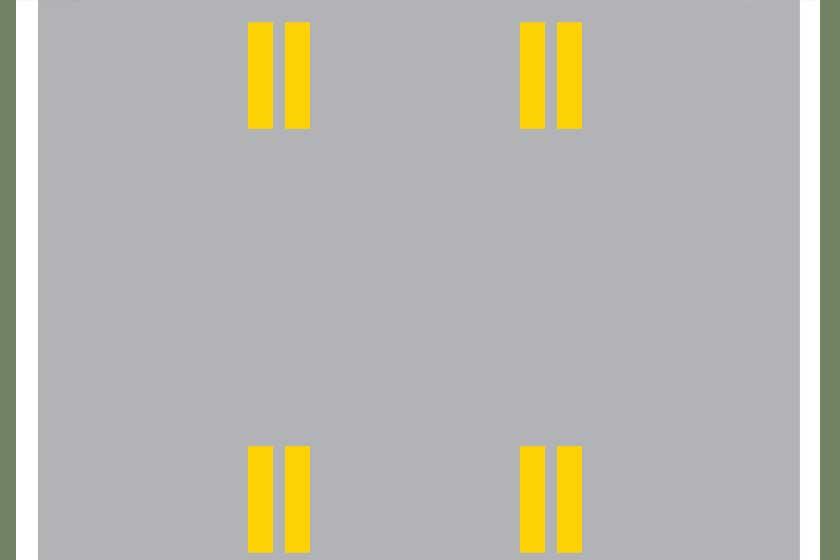 Pavement markings in a reversible lane consists of a normal broken double yellow line on each side of the lane.

You must not cross the yellow lines to a reversible lane, unless lane-use control signals indicate that the lane may be used for through travel in your direction or for a left turn.

These pavement markings can consist of: 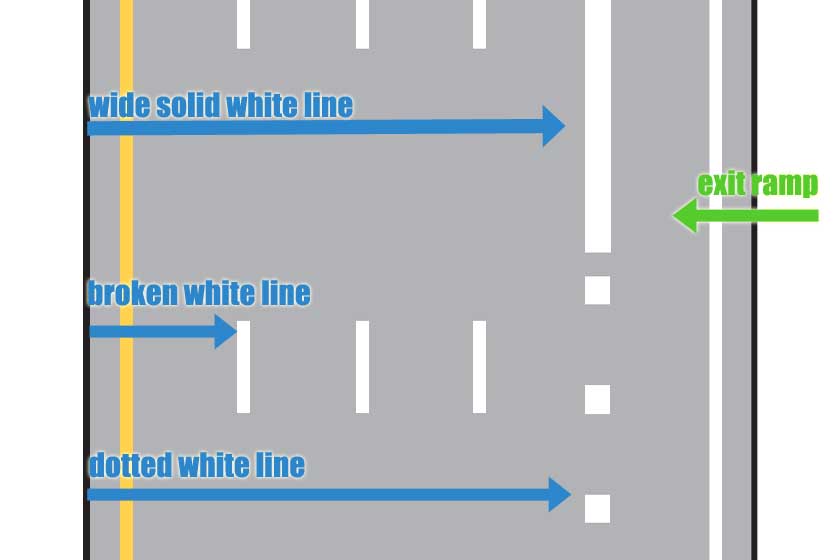 A normal broken white line separates lanes where you are permitted to change lanes. Cross the lane line markings with care.

When normal or wide solid white lines are painted between travel lanes, you should stay in your lane. The solid line means that crossing the line marking is discouraged. You should only change lane when it is necessary to avoid an incident.

The solid white lane line marking is often used to separate a through lane from an added mandatory turn lane at intersections. Once you have entered your lane, don’t change your mind in the last second. Respect the pavement markings.

If a double white line separate travel lanes, you are prohibited from crossing the line. You must not change lanes for any reason.

Other Pavement Markings You Should Know

Sharrows: They are Shared Lane Markings. Such markings simply remind you that the traffic land can be used by both motorists and bicyclists. Note the difference between a designated bicycle lane and a shared roadway (sharrow) that is also open for motorists. 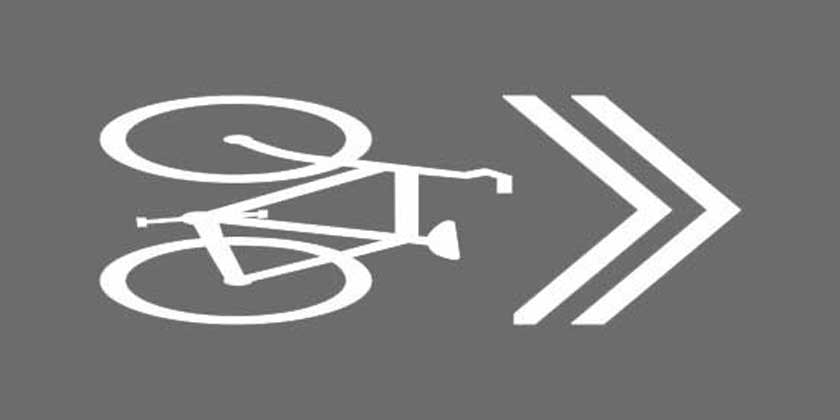 HOV lanes: These lanes are reserved for certain vehicles and marked with a white diamond symbol. Signs beside the lane will indicate what vehicles can use the lane. 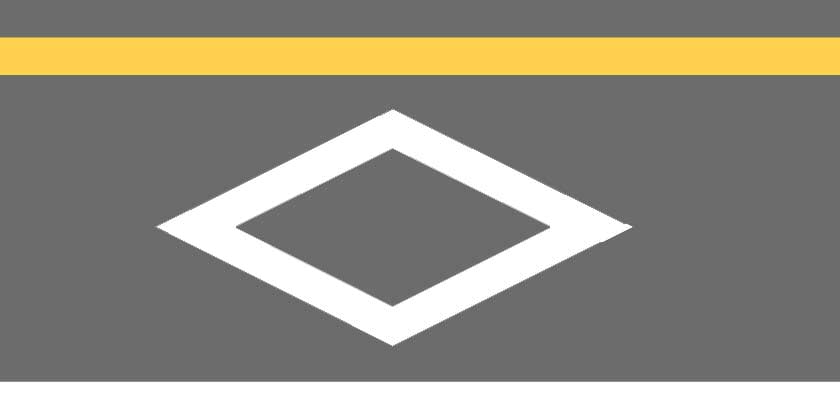 Stop or limit lines: Such lines are white and painted across the travel lane at intersections and indicate where you must stop your vehicle, when required to do so by a sign or signal. If there is no stop line, you must stop before entering a crosswalk or the intersection.

Summary: Everything You Need to Know in This Video!

This video summarizes everything you need to know about road markings for your State’s DMV test. 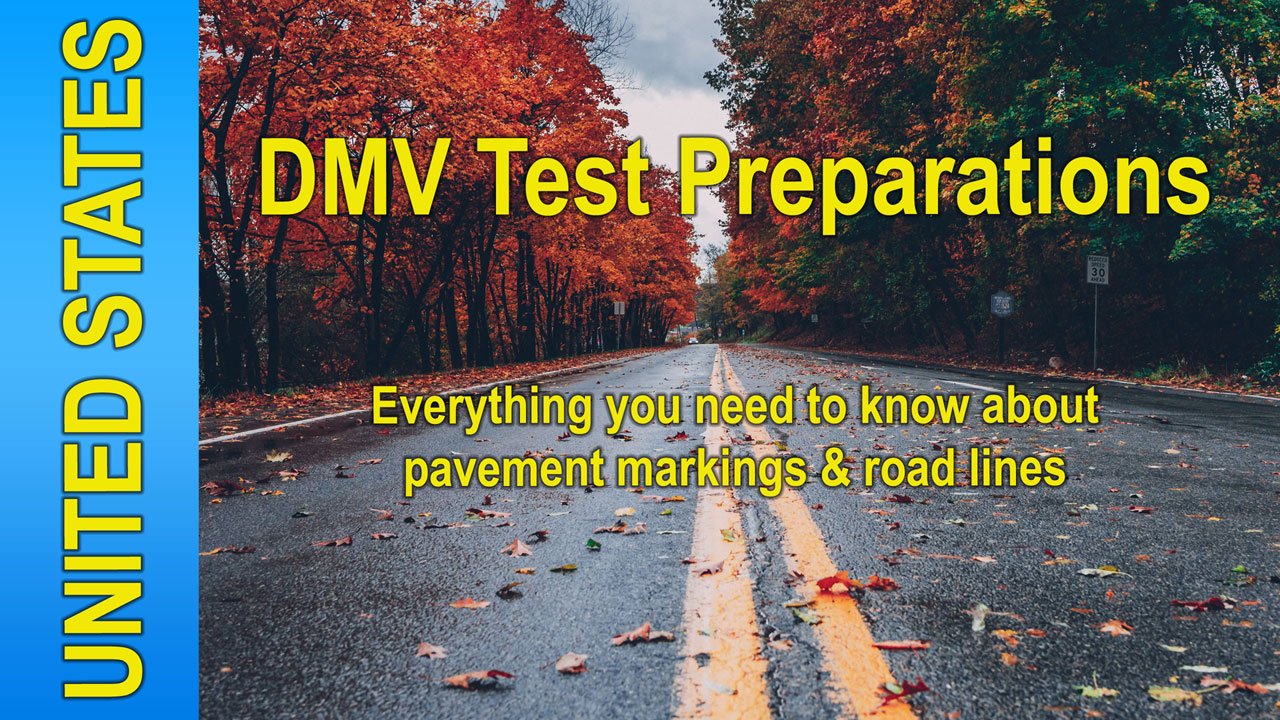 #1. When is a double white line used between traffic lanes?

A double white line is two solid white lines that indicate a lane barrier. They tell you that crossing the lines to change lane is prohibited.

Sharrows are shared lane markings. They remind you that a traffic lane can be used by both motorists and bicyclists.

#3. What do two solid yellow lines on a two-lane road indicate?

If you find yourself on a roadway with yellow to your right and white to your left, you are going the wrong way. Remember, yellow is used to divide opposing roadway traffic and can indicate the left travel edge of a divided roadway.

Yellow line markings should never be on your right side; always on your left side.

#5. Road lines that separate traffic going in different directions are:

#6. What color are road lines that separate traffic going in the same direction?

#7. If you turn into a road at night and see road reflectors shine red, the reflectors tell you that:

Red markings or reflectors indicate a roadway that must not be entered. If you are going the wrong way at night, the road reflectors will shine red in your headlights.

#8. What does a white diamond symbol on the pavement usually mark?

Lanes marked with a diamond symbol are known as carpool or high-occupancy vehicle (HOV) lanes. The white diamond symbol may also be used together with a bicycle symbol to mark bike lanes.

#9. Broken double yellow lines on each side of a lane indicates:

#10. A two-way left turn lane is marked on both sides with:

A two-way left turn lane is found in the middle of a two-way street. It is marked on both sides by two yellow lines. The inner line is broken and the outer line is solid. Who are Better Drivers - Men or Women? What does the Basic Speed Law Mean? What are the Basic Colors of U.S. Road Signs?