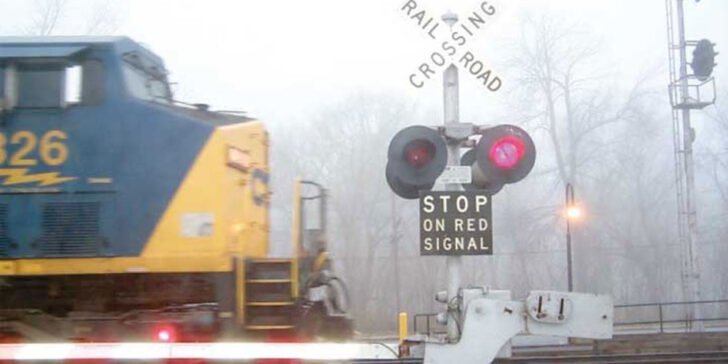 What Should You Do if Your Car Stalls on Railroad Tracks?

What should you do if your car stalls on the tracks at railroad crossing and a train is approaching?

First, do not assume you have time to push your car off the tracks. It is extremely hard to judge the speed or distance of a moving train. Approaching trains create optical illusions, appearing to move slower and be farther away than they actually are.

Second, never stand beside your car and try to make the train stop. Trains cannot swerve or stop quickly. Even if the locomotive engineer sees you, a freight train moving at 55 mph may need a mile or more to stop once the emergency brakes are applied. That is a lot of football fields!

So remember this simple rule: Forget about your car and get out of the way as quickly as you can!

Why You Should Run towards the Train

Leave your car and quickly run away from the tracks.

Then comes the tricky part. In which direction should you run?

The correct answer is towards the train.

You should not run down the tracks and away from the train, which is in the same direction as the train is going.

Some users react to this:

I can’t run in the opposite direction of the train. I’ll get killed.

How can that be right? I will run into the train!

Staying Clear of the Tracks

Remember, the first part is to stay clear of the tracks. Never run on the tracks. This should be obvious, shouldn’t it?

You best strategy is to run at an angle towards the train. Move away from the tracks at the same time as you are running against the moving train.

Why Should You Run Towards the Train?

Now, why is this the best strategy?

Wouldn’t it be safer to run in the other direction or as far away as possible from the tracks?

To understand the strategy, you must think about what will happen when the train hits the car.

The second the train strikes the car; it will send flying metal and glass forward and outward from the locomotive!

Think about that part again. Debris will be flying forward and outward from the locomotive!

Debris will not fly to the rear or in the direction from which the train is coming.

Being behind the locomotive when it hits the car is the safest place to be in crash.

That is why so important that you (and your passengers) run far enough away from the tracks and in the direction of the oncoming train so you will not be hit by the flying debris.

If you try to outrun the train or even run in a 90-degree angle from the tracks, you are more likely to be hit by flying debris.

Taking the DMV Practice Tests for Your State