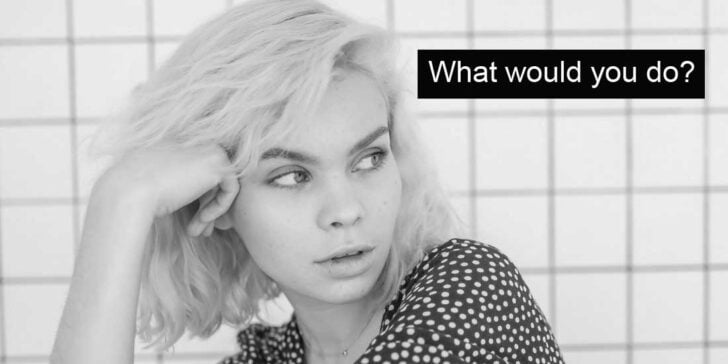 Is there an obvious answer?

Let us say you live in a suburb anywhere in United States. There is a 45-minute drive to the closest largest city in your state.

Now, you can drive alone anywhere you like, with or without friends.

But. Then, there are parents.

Your Mother is Concerned

You want to drive alone and head downtown one day. With the family car.

Since you haven’t done much driving since you got your license, your mother is concerned.

According to her, you never spent much time on the interstate and never driven in a larger city by yourself.

We all know that lack of driving experience increases the risk of an accident, so her concern is nothing you can easily brush off.

Your argument is that you have earned your license, had it for two years, and are fully capable of driving in any situation. Even if you don’t drive every single day.

So, who should budge? 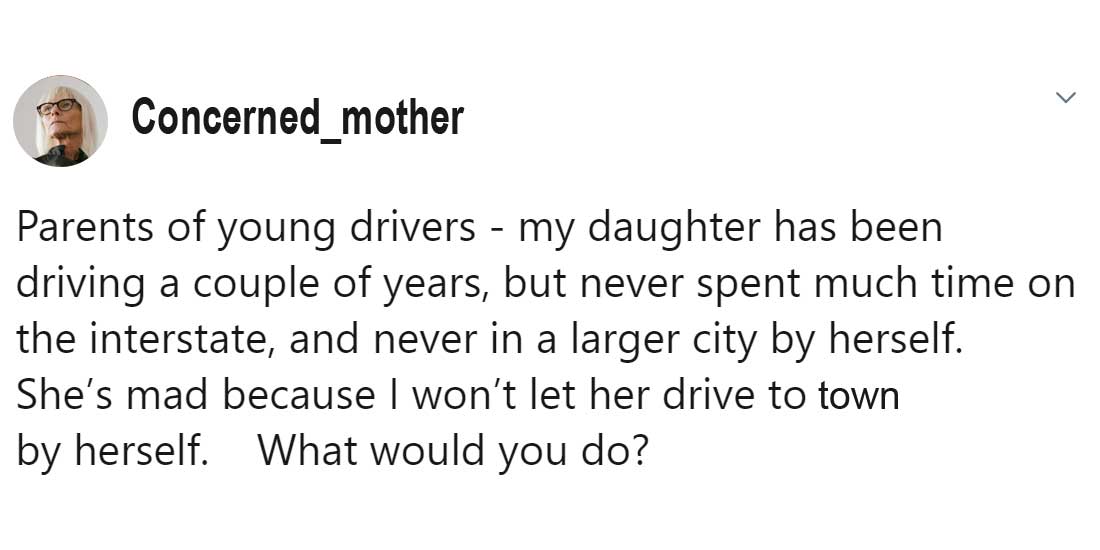 Your Mother Asks for Advice

Your mother goes on twitter and asks for advice. Parents of young drivers: Should I let my daughter drive on her own. What would you do?

You could, of course do the same thing and post the question on Twitter, Facebook, or any other forum. To teens with worried parents: What would you do?

Some of the Answers Your Mother Got

Keep her safe…that is #1. She needs more experience on interstates. Trucks, for example, are dangerous if one doesn’t understand physics. A young driver pulled between two trucks and was crushed between them when traffic suddenly slowed down. She couldn’t see the upcoming jam.

You say she’s driving for several years. So she needs more exercise on interstate and in cities. It’s hard to let go, but she’ll be OK.

I would let her go. She’s been driving a couple years. Driving isn’t rocket science and if she’s decent behind a wheel she’ll be OK.

Inexperienced drivers in new situations scare the shit outta me. You will never regret erring on the side of caution. But if you think she is up to it boost her confidence and make sure she knows what she’s in for and exercises situational awareness.

That is nerve-wracking – a tough decision! But follow your gut. She may not like you /your decision in the moment, but it will pass!

Trust your gut. Lots of people do not follow traffic laws and are dangerous, and she doesn’t realize that as a passenger. Driving today is not what it was 30-40 years ago. It takes much longer to adjust. Let her drive, but only with you with her.

How prepared are you?

Doesn’t any of the answers make sense? Which should you follow?

The question you must ask yourself as a teenager with little experience is: how prepared am I to deal with the myriad hazards of the road?

Because make no mistake, driving involves concentration and preparedness for many different hazards. The driving task should not be taken lightly.

Sobering fact: The crash involvement rate of drivers under 25 years is still a lot higher than drivers middle-aged drivers. The major reason why young drivers are involved in more accidents is their inexperience behind the wheel.

It takes time to gain experience. That is why young drivers must develop critical driving skills and practice them in a range of driving environments and conditions.

What do you think?

If you are a teenager: Should you be allowed to drive downtown alone. What do you think?

If you are a parent: Should you let your teenager drive alone?