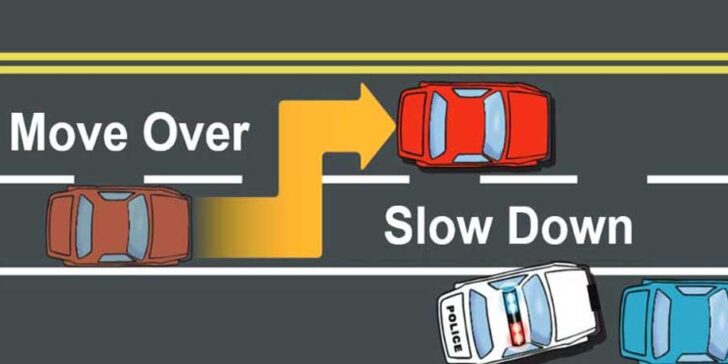 New York Move Over Law means drivers MUST use due care when approaching an emergency vehicle or hazard vehicle parked, stopped, or standing on or beside the roadway.

On parkways or controlled access highways, due care means drivers MUST over one lane from the stopped vehicle, when reasonable and safe to do so. (§ 1144.)

The Purpose of the New York Move Over Law

It is important to learn about New York’s Move Over Law. Mainly because the safety of officers and crews working on the side of the road depend on drivers obeying the law, but also because the law is a common subject on the DMV driver license test.

As you probably understand, the law exists to provide a safer environment for officers, emergency personnel, and maintenance workers who are stopped along the side of highways. When their vehicles are close to moving traffic, accidents can be prevented by leaving more room for them to operate.

Every year, officers, firefighters, and tow truck operators are killed because drivers fail to give them enough room.

The Meaning of the Move Over Law

The law says you must exercise due care to avoid colliding with an authorized emergency vehicle which is parked, stopped, or standing on the shoulder or any portion of such highway and displaying any combination of flashing blue, red and white lights.

This also applies to any hazard vehicle, like a tow truck, which is displaying one or more amber lights.

In 2017, the law was expanded to also include a vehicle which is parked, stopped, or standing on the shoulder or any portion of such highway and displaying a blue or green light.

The law basically includes all kinds of authorized vehicles performing any kind of duty on or beside the road and is displaying white or colored flashing lights. It applies when the vehicle is stopped on any part of the roadway or any shoulder, not just the shoulder on the right.

What Does “Exercise Due Care” Mean?

Due care refers to the level of reasonable prudence and activity that a person would be expected to exercise under certain circumstances and when looking out for the safety of others.

On parkways or controlled access highways the “due care” generally means you must move from the lane immediately adjacent to the shoulder where the vehicle is stopped. But only if it is safe to do so – and only if such a move complies with other rules and statutes.

If you are driving in the right lane on a multi-lane highway and there is a stopped law enforcement vehicle ahead, check if it is safe to change lanes. Don’t forget to check your blind spot.

Move over to the next lane if you can do so. Adjust your speed, if necessary. 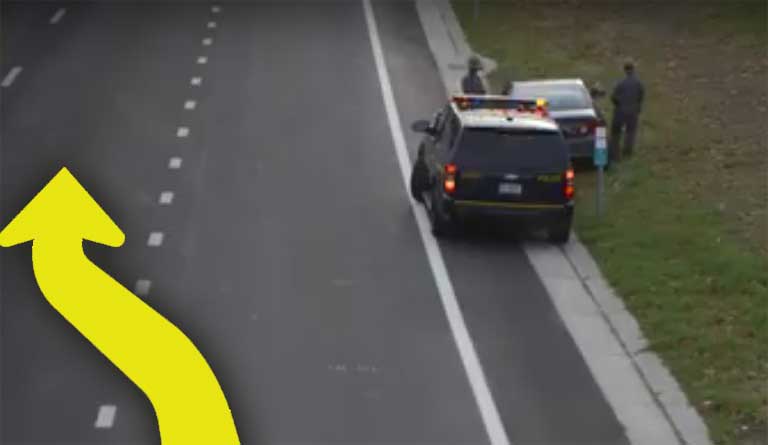 If it isn’t possible to move over, you must slow down to a speed that is safe for people on or beside the road. Be alert and make sure you can stop quickly, if needed. The closer you drive to the stopped vehicle, the slower you must drive. Watch for vehicle doors opening.

A rule-of-thumb is to slow down at least 20 mph below the posted speed limit – this is also the law in some other states.

When driving on a two-lane two-way roadway, you may pass on the left side of the roadway if safe and not prohibited by signs or pavement markings.

If there is a solid yellow line on your side of the roadway, you cannot go across except to turn left to enter or leave the highway (§ 1126). You are, in other words, prohibited from moving over to the left side on such roadways. In this situation, you must stay in your lane and slow down.

If the road is blocked, be prepared to stop, and wait for instructions. Keep a safe distance to stopped vehicles. Don’t drive onto the shoulder and park your vehicle.

Safe Driving Tips on the Thruway

This article was originally posted on permit-practice-test-ny.com.