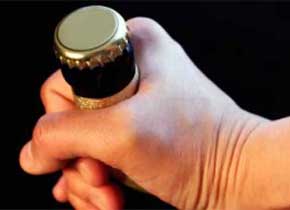 1. If you sell alcohol to a minor, you are subject to a mandatory suspension of your driver's license for up to:

Click/tap on your answer:

Pay Attention to the Chapters about Alcohol and Drugs

Impaired driving has been a major problem in United States for many years. Unfortunately, driving under the influence of alcohol and/or drugs is not only a problem for the impaired driver, but for anyone on the road, as well as friends and families to the drunk driver and anyone who gets in the way of an impaired driver.

Across the states, about 30 percent of all vehicle deaths are tied to impaired driving. Even if injuries and fatalities because of impaired driving have declined over the past 10 years, numbers are still high.

That is why you are likely to see questions about alcohol and drug use on your DMV test.

Only Time Will Sober You Up

DMV wants you to understand that drinking and driving has severe consequences. They also want to kill myths about multivitamins and other hangover cures that help you sober up more quickly. That is why you should know that there is only one thing to do if you have been drinking!

Is Alcohol a Stimulant?

It is a common mistake to think that alcohol is a stimulant - it is NOT. Alcohol is a depressant. So why do people feel happy and relaxed when they drink? Read this! It is what you should know about alcohol for your driver license test!

When drinking alcohol, gender and body fat are two important factors that determines how much alcohol winds up in your bloodstream. This article will explain how body fat affects two persons who weigh the same and why it can be important.